Alright, pretty sure this is the second to last AX entry for me. Regular readers of my blog should be familiar with this...it's the swag post! :P

First up...things I bought from the H!P booth in the exhibition hall. 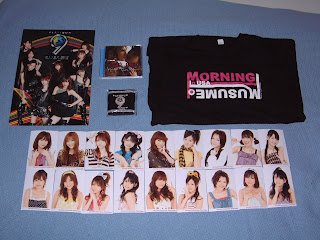 - In the upper left is what H!P's booth was calling the "Morning Musume Visual Book", or something to that effect. I'm pretty sure it's actually the Platinum 9 Disco tour pamphlet, and there are some awesome pictures of the girls in this one. :)
- Hangry & Angry - Kill Me Kiss Mini-Album
- Platinum 9 Disco Wristband
- "Morning Musume In USA" t-shirt (this was sadly the only Momusu t-shirt they had at the booth...bad planning on their part, as I know lots of people - myself included - would have bought more if they had them O.o)
- 2 Morning Musume photo sets

The two pictures below are the contents of what was called the "Morning Musume Happy Set". For $60, you got 5 randomly selected items (I think they were mostly tour pamphlets and the like, although I heard you could get a towel if you were lucky), 2 randomly selected photo sets, and a bag to hold it all. 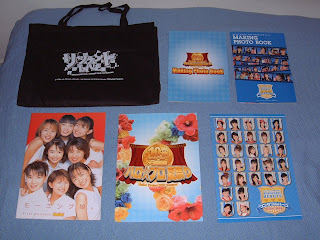 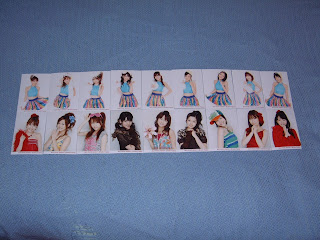 - Everyone got the same bag, which was from Momusu's 2008 Autumn concert tour, Resonant Live. It's honestly a little flimsy, but cool nonetheless.
- I got the following pamphlets:
- 2 randomly selected Morning Musume photo sets

And this is stuff I got from other H!P fans over the course of the week. 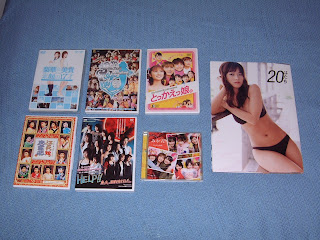 - There was a guy selling DVDs at Hello!Party, and that's where I got all of these:
- Mikan RE (traded a copy of Risako's photobook Ring3 for this with Wendy...obviously I got the short end of the deal, but Wendy is cool so it's all good :D)
- Kamei Eri Hatachi photobook (this is the one those Japanese fans were selling an In-n-Out on Sunset Blvd XD)

Not a bad haul, if I do say so myself. My only regret is not grabbing some of the other DVDs the guy at Hello!Party was selling (he had Vol 3 of Futarigoto and the MiniMoni movie, amongst other oddities XD).

Probably going to do one more post with some final thoughts and a summary of what I gained from my time in LA. お楽しみに！
Posted by Zac at 4:12 PM